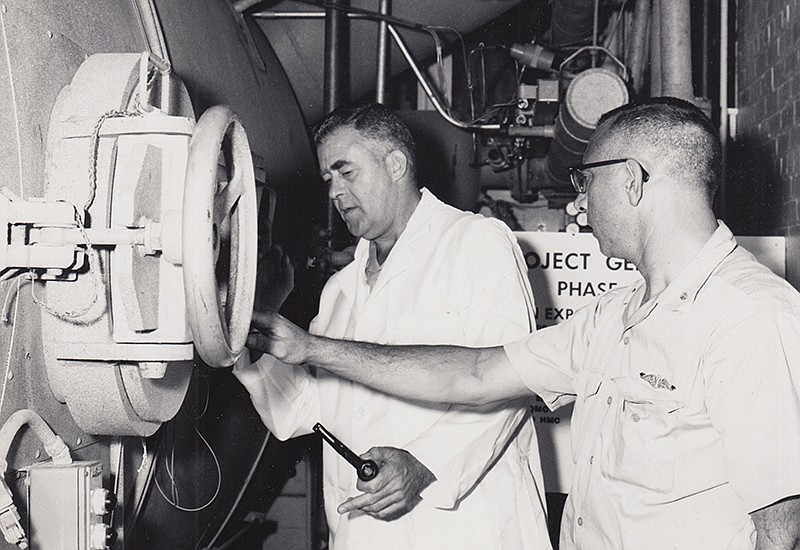 George Bond was a leader in the field of undersea and hyperbaric medicine. Before gathering valuable physiological data on aquanauts while running the U.S. Navy’s Sealab program, Bond had first set the stage by leading the Navy-supported Project Genesis.

Project Genesis was the first testing and confirmation of the theory that increased pressures (at or simulating greater depths) for long enough periods of time allow the blood and tissues to become fully saturated with inert gases such as nitrogen or helium, necessary for safe breathing mixtures (dependent on pressure/depth). The benefit: indefinite time under pressure with no increased decompression time later (slowly bringing a diver back to normal pressure so that accumulated gases diffuse safely from body tissues).

After usually 24 to 36 hours under pressure in an underwater habitat, nearly a full day to several days of decompression will be required, but this does not increase even after 60 days down. With an underwater habitat compressed to the same pressure found at its depth on the ocean floor, aquanauts can safely dive for eight or more hours a day, as opposed to about an hour with normal scuba diving. 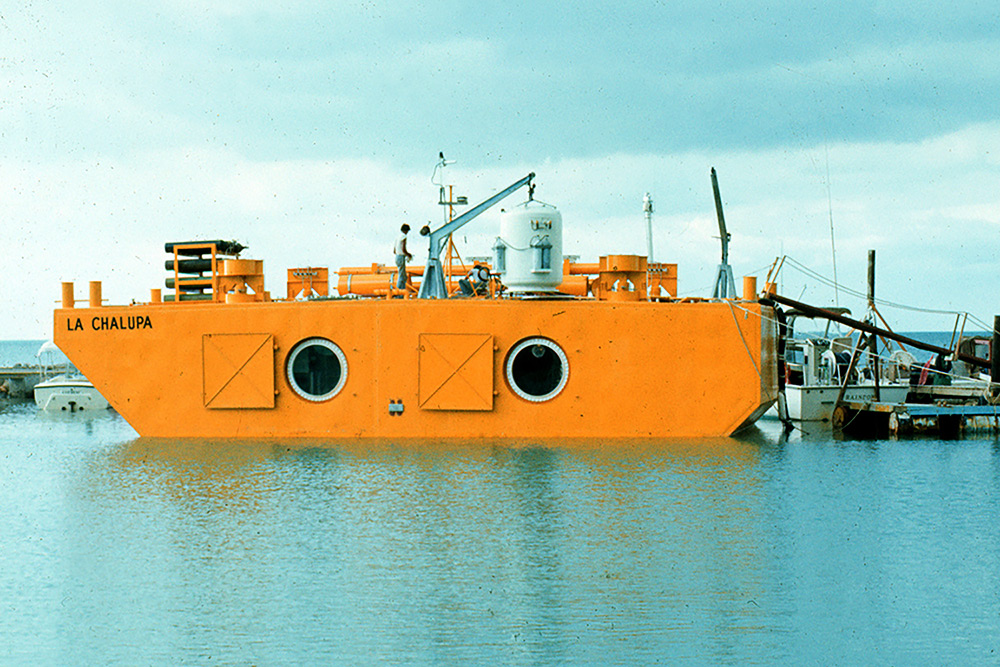 More than 50 aquanauts occupied the La Chalupa underwater habitat over 11 two-week-long missions, named PRINUL. PRINUL stands for Puerto Rico INternational Undersea Laboratory. From the habitat, working eight to ten hours in the water a day, scientists studied reef ecology, diving physiology, geology, and ocean engineering. The program was run by Ian Koblick, early aquanaut and coauthor of Living and Working in the Sea, the definitive book on man’s ventures in seafloor habitation.

La Chalupa demonstrated the advantages of a mobile seafloor habitat system and could be handled on the surface in five-foot seas. 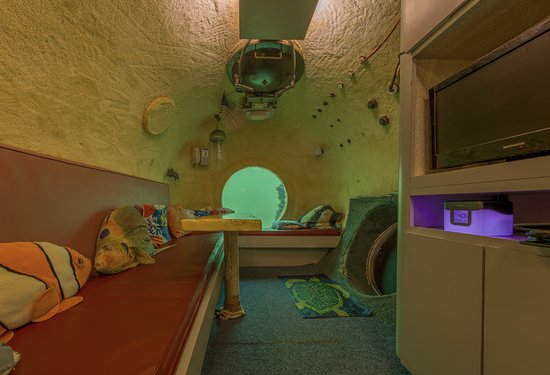 Inside a room at Jules' Undersea Lodge

The original La Chalupa habitat was partially refurbished for a treasure ship recovery project that fell through before being purchased in 1985 by Ian Koblick and Dr. Neil Monney. The habitat’s conversion to Jules’ Undersea Lodge was made possible with backing from the Marine Resources Development Foundation (MRDF), which had also been a backer of La Chalupa.

Jules’ Undersea Lodge has hosted several special projects, including a 30-day NASA crew behavior study. Overlapping this study in 1992 was a 69-day mission to raise awareness about ocean living, in which Richard Presley set a world record for seafloor living at the time. From 1993 to 1995, the habitat was used for NASA’s OCEAN Project. Ian Koblick and first aquanaut-astronaut Scott Carpenter used the habitat to speak with Mike Gernhardt aboard space shuttle Endeavour. 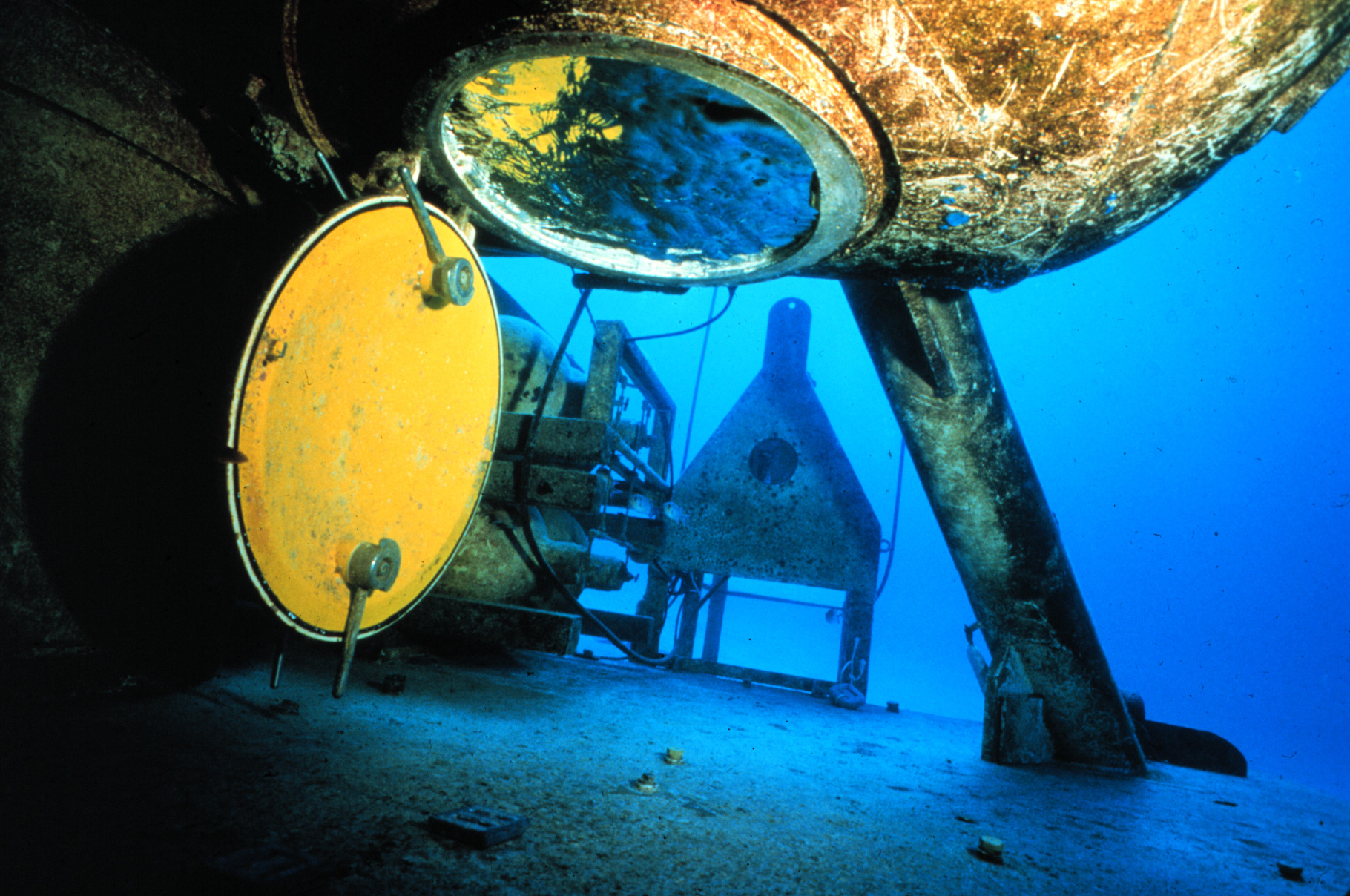 More than 500 aquanauts occupied the Hydrolab underwater habitat during over 140 missions lasting from one to 13 days.

In 1968, a dry transfer of three people was performed between Hydrolab and a four-man lockout submarine.

From October 15 to 17, 1969, a fuel cell was used for the first time to supply all electrical requirements for Hydrolab. During this test period, the habitat was self-sustained with no topside or seafloor-to-land cables. This enabled the crew of three to perform the first and only totally autonomous seafloor live-in.

In 1970, a life-support buoy was added that allowed Hydrolab to operate for extended periods without manned support on the surface. In 1975, test excursions from 200 to 250 feet in depth used Hydrolab for decompression at 60 feet. This was the first time decompression excursions had been used from a seafloor habitat. 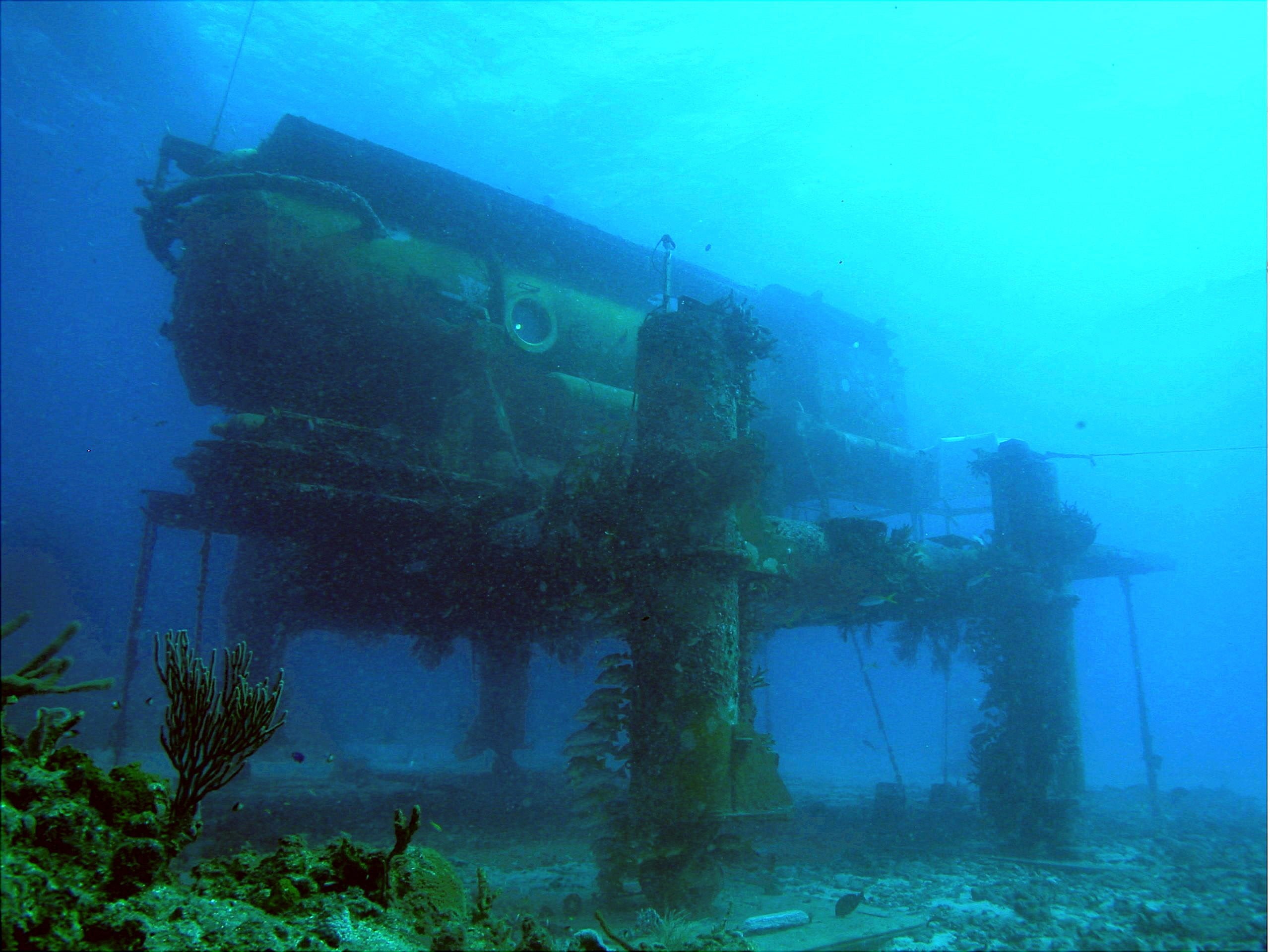 The Outset and Outlook of Underwater Habitats

Dangled from a ship to 200 feet beneath the French Mediterranean Sea within a 3-foot-wide aluminum cylinder for 24 hours and 15 minutes, Robert Stenuit became the first aquanaut in 1962 as part of Edwin Link’s “Man-in-the-Sea” program.

Since these first pioneering programs, to include Jacques Cousteau’s “Conshelf”–which placed aquanauts down a week later–there have been over 60 seafloor habitat programs, many backed by associations and corporations. Unfortunately, loss of public interest and necessary funding has caused a sharp decline in the creation and use of underwater habitats for scientific purposes. In fact, Aquarius–here in the Florida Keys–is the world’s only undersea research station still in use.

Though kept at surface pressure and mainly attracting tourists, commercial underwater habitats such as hotels and restaurants are growing in popularity. Perhaps through them, interest in the creation of scientific habitats can be renewed.