Manufactured in the early 1930s by Otis Barton, engineer of the Bathysphere. It was likely made before the full-scale Bathysphere and used for promotion and fundraising.

The 5,000-pound cast iron Bathysphere had a diameter of less than five feet but would carry two explorers–engineer Otis Barton plus naturalist and biologist William Beebe–to observe ocean life down to a record 3,028 feet below the surface in 1934. Their only perspective was from two eight-inch fused quartz portholes. A third was plugged and had a floodlight over it.

Beebe and Barton were sealed in from the outside like astronauts, with the Bathysphere tethered to a research ship at the surface by a single steel cable 3,500 feet long and seven-eighths of an inch thick. A telephone line allowed Barton to relay Beebe’s observations, which were documented by scientists and an illustrator on the research ship.

The two men–who had each explored shallow waters using his own homemade diving helmet–sat cramped on cold, hard, curved steel and had to circulate oxygen from tanks with a palm leaf fan. During test dives, they faced electrical shorts, a severed telephone cable, and leaks, with the sphere occasionally coming up full of dangerously pressurized water. Bad weather and a roiling ocean thwarted dives as well. 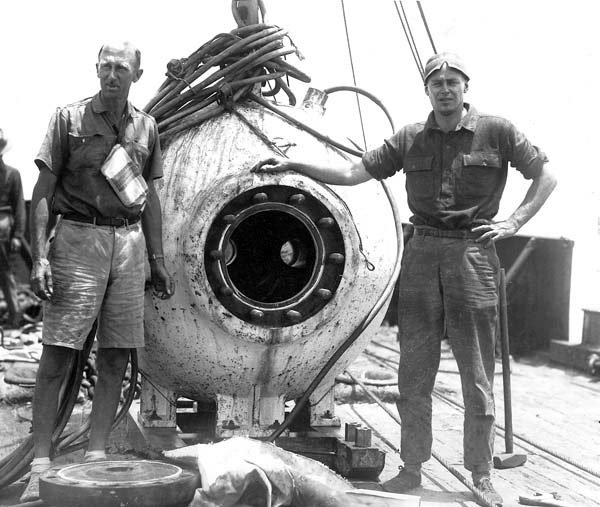 Bathysphere Expedition: Study of the Deep

Otis Barton had wanted to design his own vessel and explore the ocean’s depths, but despite being rich, he lacked the funds for his own expedition. He read about the same endeavor of William Beebe, who was backed by the New York Zoological Society. Already captivated with Beebe and his popular books, Barton brought him blueprints; the Bathysphere expedition became a joint pursuit.

From 1930 to 1934, Beebe and Barton made 35 dives off Bermuda in the Bathysphere, 16 of them below the previous record depth of 525 feet. Up to that time, Beebe and other marine biologists had relied almost exclusively on deep-sea trawling to study creatures of the deep. Though Beebe still brought up live creatures in nets, he was the first scientist to study the behaviors of deep-sea creatures within their natural habitats.

With his vast experience studying such creatures from trawling nets, Beebe was able to quickly identify many bioluminescent fish only by the patterns of light they emitted while passing in front of the Bathysphere. He also named several new species. Bait was arranged around the Bathysphere’s portholes to attract fish for observation; to the same end, Beebe had suggested painting the exterior of the Bathysphere a light color. The interior was painted black to improve viewing into the dark depths. 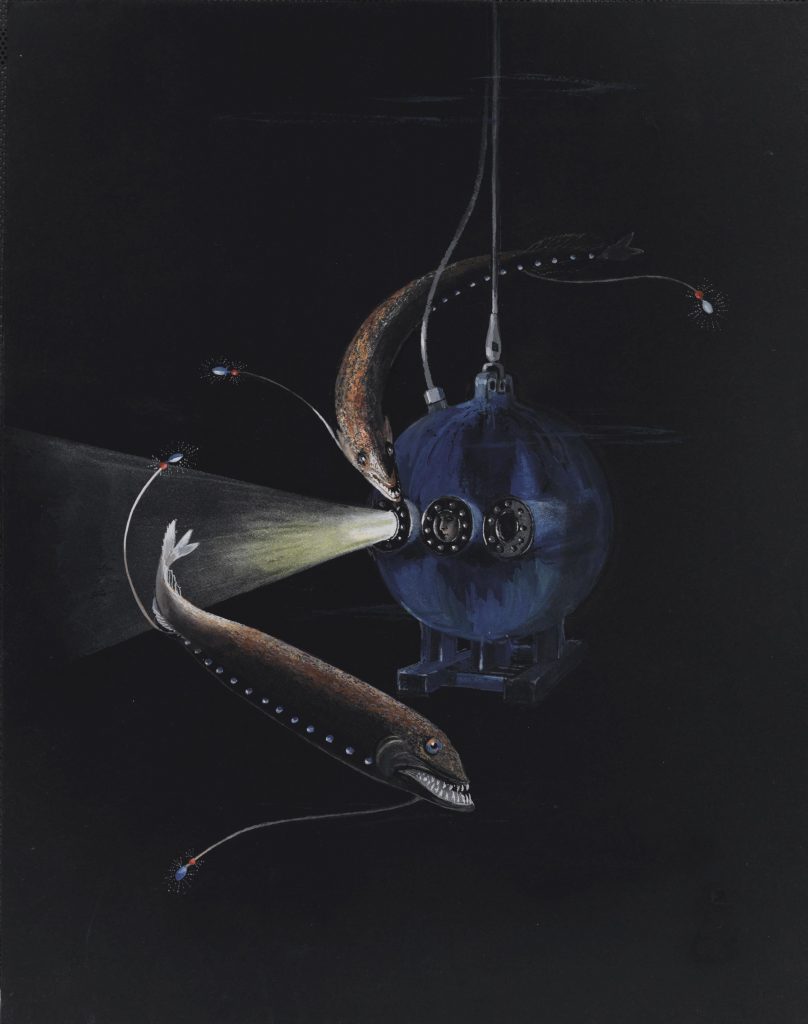 Else Bostelmann painting of expedition

When critics chastised William Beebe for employing women in science, calling him “unprofessional,” Beebe responded that he hired based on “what’s above the ears” and that he had chosen researcher Jocelyn Crane and chief technical associate Gloria Hollister for their “sound ideas for scientific research.”

Since maintaining communication between the Bathysphere and the mother ship was such a high priority, Beebe or Otis Barton kept up a running, often silly dialog with the surface. It was Hollister who manned the ship’s phone line to the Bathysphere, copying down Beebe’s and Barton’s observations. For one descent in 1932, the National Broadcasting Company invited all of America into the deep sea, transmitting radio right from Hollister’s line. Hollister also descended in the Bathysphere herself, in 1930 and 1934 setting records for the deepest dive by a woman, her ultimate depth 1,208 feet.

After dives, nature artist Else Bostelmann transformed Hollister’s notes and Beebe’s recollections of the animals into paintings. Her technical illustrations were the expedition’s primary visual documentation and appeared in National Geographic Magazine.

Many doubted and even ridiculed the identifications and drawings resulting from this first pressurized submersible capable of taking an observer to the crushing depths of the deep, now sitting on display at the New York Aquarium. Even so, the Bathysphere expedition sparked a wave of further submarine development and deep sea exploration that would lead to the Trieste and its 1966 journey to the deepest point in the ocean. 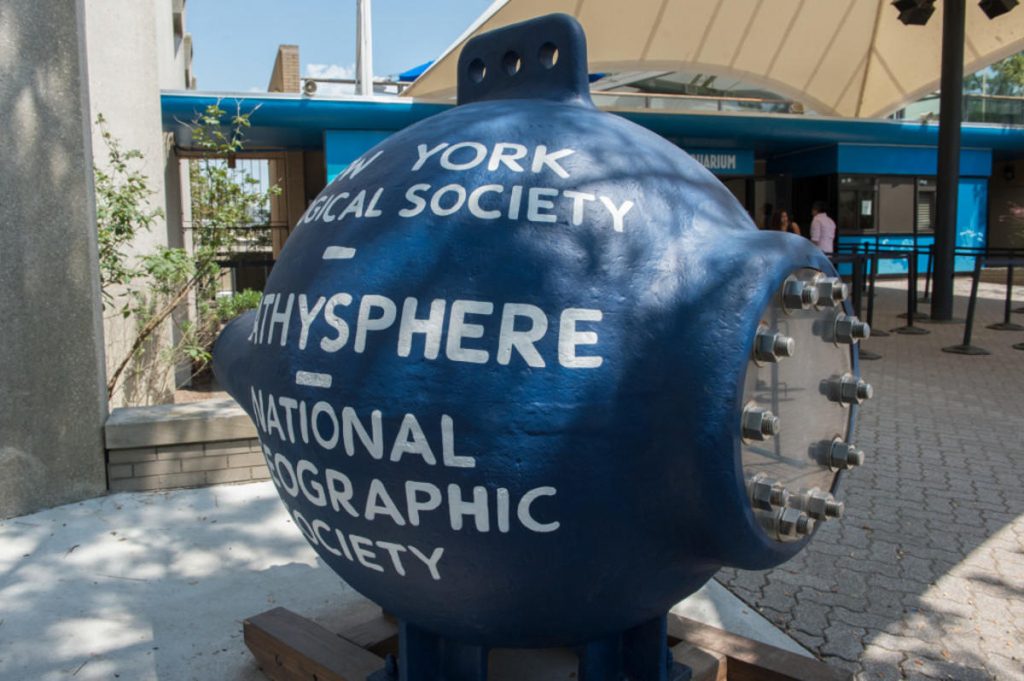 The Bathysphere, now at the New York Aquarium

Otis Barton next conducted his own dives in the Bahamas, producing, directing and acting in a 1938 fictional dramatic film about the Bathysphere called Titans of the Deep. Having paid for the design and construction of the Bathysphere, Barton then donated it to the New York Zoological Society. He would design another deep-sea diving sphere called the Benthoscope. In 1949, Barton established a new depth record of 4,500 feet by descending solo in it. It remains the deepest dive by a submersible suspended by a cable. Barton published his book The World Beneath the Sea in 1953. In 1978, Barton successfully tested his "jungle spaceship," an airship intended to film wildlife in rainforests.